Award winning Investigator Olivia Ellenger interviewed by the Daily Echo - 'Behind the Lens of a PI'. To find out more, call us on 02380 308274 or send an email to southampton@private-detectives.co.uk

TAKE one look at Olivia Ellenger and you would think she looked no older than a school girl. Just last week she was even asked for ID to buy a lottery ticket. However she is a lesson not to be fooled by appearances. Forget men in trench coats and trilbies, Olivia is among Britain’s army of “teen” spies responsible for tracing runaways, exposing corporate fraud and uncovering sex scandals - without arousing any suspicion at all. In the three years she has worked for the private eye agency she has reunited families, helped a man whose mistress threatened to send out pictures of his genitals to his wife and children on Twitter unless he handed over £25,000 and she has even uncovered a porn ring

He said: "When people pick up the phone to call us they tend to have gone down quite a long road already. "If you are in that situation, you feel bad enough without worrying about whether the stranger at the other end of the line will judge you. "Our staff are aware of the specific needs of the gay community and we pride ourselves on being able to make people feel at ease as well as being able to deal with sometimes difficult issues." The firm's founder said the rise of online communication has sparked a marked modern-day increase in the age-old problem of blackmail

“If I am sent undercover or doing surveillance, following you in your car or sat opposite you on a train, you probably wouldn’t think much of it,” said Olivia, who occasionally dresses in school uniform for assignments

“I didn’t go to university. I was living in France as an au pair and helping with admin work. I wanted to move back to the UK. My mum pointed out an advert in the newspaper, which sounded so strange I thought ‘is it a joke?’

“There was no big spread, just a two line advertisement saying ‘Want to be a private investigator? Call now’

“I got a call back Thursday, an interview Friday and I started on the Monday.”

Olivia, who works for Answers Investigation which has an office in Southampton and has a specialist Teen Detectives Unit, said: “It’s been a rollercoaster but I haven’t looked back since.

“I rarely tell people what I do if I am at a dinner party or on a night out. You either have those who think private investigators are the whole shebang, think, James Bond, Sherlock Holmes and they say ‘oh my God, your job is so exciting!’ then you have the more realistic perception of those who say you just follow husbands and wives cheating all the time but the reality is we do a lot more than that."

No two days are ever the same for Olivia, who often works with a male colleague

They are both quick to dispel the image of the profession as seedy, trench-coated individuals rifling through people's bins and blagging their way into the Police National Computer, something which is illegal

In the USA private investigators are licensed and have the same ability as the police to use the national computers and resources. Here, they have the same rights as any other citizen

The work is varied. There is the corporate sector which includes issues in the workplace such as absenteeism, moonlighting or stealing, the legal sector where the team of investigators, on instruction by the courts, serve legal documents surrounding family law, employment and accident investigation and the private sector where the clients can include anyone from parents who fear their children have fallen in with the wrong crowd or are not being properly cared for by the other parent with custody, or relatives tracing missing people to exposing illicit affairs for suspicious spouses

“It all came about because the client saw an email bounce back on his computer. When she read on, the thread was about organising a shoot.

“It had gone on for 10/12 years. Their sex life had stopped completely. He claimed he couldn’t have sex but that obviously wasn’t what we discovered.”

Isn't it horrible having to deliver such hurtful news? Olivia, explained: “As a private investigator, you want justice done. I often find with matrimonial, a woman’s intuition is often right but to get the proof is actually a nice feeling because they have been made to feel like they have gone crazy for such a long time.

“By that stage, the client has poured out so much of their life to you in order to progress the investigation that when it comes to the crunch moment, they already know anyway.

“Even the really bad things turn out good because there is always a reason that person wants to find out. You may be answering questions they have been asking themselves for years.”

For others though, there is sometimes no proof at all to match their suspicions

Olivia, said: “Some people get very paranoid. Some men for example will pay us to follow their wives and she may just go shopping or to the gym.

“One female police officer in London spent £20,000 over six months on another officer who she was having an affair with. He was married but she wanted to keep an eye around the clock on his marital home to see if another female colleague was going round as well.

“Some people may think we take on anything but our number one rule is that if we don’t like the sound of the client or the reason they want us to take the case on, we just don’t do it. "You have to trust your instincts and be clued up.”

Despite experiencing the seediest and saddest people in her line of work, Olivia believes nothing will make her cynical.

“You have to switch off and leave it in the office because otherwise you would become cynical and suspect everybody of anything.

“Of course the job can affect some people’s outlook but not me. I don’t think it has changed my perspective of people at all. I am of the opinion that until proven guilty, everyone is innocent."

Olivia pauses and smiles before adding: “And as long as you have a decent amount of information about somebody, and the financial means to do it, it is normally quite easy to find someone out.” 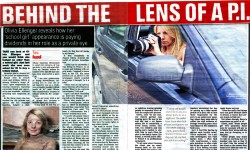 Articles about our work as Private Detectives feature in many publications

"searching the world for answers"